Over the past few years there's been a large push to "map the human brain." But what exactly are we trying to accomplish with a brain map and why is it such a difficult task?

In general a brain map refers to one of two things:  an effort to define the functions of different brain regions, or a digital representation of actual neuronal connections. Either of these tasks is daunting, though for different reasons.  However, today I'm going to focus in on the type of brain map that attempts to actually model the connections of neurons.

Recently MIT set out to use the power of gaming and crowd sourced citizen science to assist in creating their brain map via Eyewire (it's actually a mouse retina, not a human brain but trust me that the difference isn't all that important). Eyewire is a simple game wherein users color in a neuron that has been defined by a computer algorithm.  The algorithm is somewhat prone to errors and so the users task is primarily focused on correcting the algorithm's mistakes.  Data gathered is then fed back into the program in an effort to improve it's ability to define neurons.

So what does this have to do with anything?

Eyewire gives us a very precise conceptualization of neurons. Take a moment and imagine what a neuron looks like in your mind.  If you're an average person you probably envision something like this: 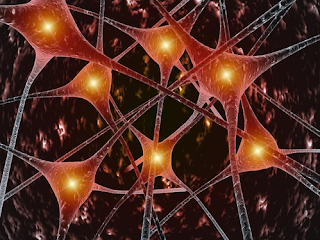 Each color in that image represents a separate neuron.  Further, these aren't the only neurons present in this space, just the ones processed by Eyewire so far (when the project is complete even more neurons will be squeezed into the same image). Now imagine attempting to untangle those seven neurons when they're not only all the same color, but also surrounded by other non-neuron cells. It's a daunting task with only a few cells. The difficulty rises even further when considering the human brain consists of billions of neurons.

Eyewire, with the assistance of thousands of users, has defined only a handful of cells over the past year. These cells are represented with outstanding accuracy and detail, but clearly at this rate of progress a full brain map would take a staggering amount of time.

Of course the entire goal of Eyewire is to improve a computer's ability to map neurons for us. If their goal is successful (and there's no reason to believe it won't be)  computers will be able to process the image data far faster than their human counterparts and with nearly as much accuracy. In that event neuroscience may produce a neuronal brain map far sooner than was thought possible only a few years ago.

If you're interested in Eyewire you can find out more at their website Eyewire.org. It's worth a look for the images alone.  More economics, neuroscience and everything else next week. Until then stay safe and rational.

Posted by Matt Criscione at 7:18 PM