Everyone has their favorite part of the holiday season. For some delicious homemade dinners best exemplify what the holidays mean. Others enjoy the shower of gifts being given and received.  However, I find that the extra time to relax and converse with family and friends to be the most enjoyable.

These conversations are often quirky, usually interesting and sometimes exasperating but I generally find myself reflecting on them for weeks later as I consider the different viewpoints presented.  The flood of different perspectives undoubtedly diversifies my own opinions as well as helping me to understand the opposing sides of many economic debates.  Occasionally these discussions even inspire me to investigate a subject in more depth.

This year while around the Christmas dinner table topics wandered from politics to watermelon theft. At one point someone mentioned that the average Canadian was better off than the average American.  It turns out that particular statistic is rather open to debate (per capita GDP is about 8000 dollars higher for Americans than Canadians) it did make me wonder if countries further from the equator had a higher level of affluence simply because being very poor would be generally more difficult in a colder climate.

As any good economist would do I immediately set out to find some data sources.  I found a list of per capita GDP and a list of countries latitude dropped them into a spreadsheet and created a scatter plot.  Sadly it doesn't seem like I've stumbled upon any remarkable insights.  Although there does seem to be some weak correlation between latitude and affluence it definitely isn't a major factor.  There are many very poor countries at high latitudes (mostly former Soviet nations) and some very rich countries at low latitudes (mostly oil rich middle eastern nations). Even if we removed the nations that derive their wealth primarily from the resources under their territory we still find nations such as Singapore with very wealthy individuals nearly on the equator. 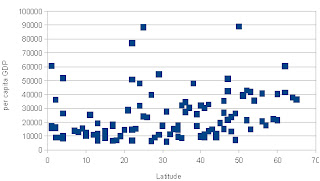 Still, one of my favorite exercises in mental gymnastics is attempting to make something incorrect seem plausible.  So let's forget for a moment that I've already told you that my hypothesis seems unlikely. Instead consider these completely true facts.

1. The area between the tropics of Cancer and Capricorn represents approximately 40% of the earth's surface area. Given the extreme climates of the far northern and southern poles it represents an even larger proportion of the livable surface area. Yet of the top twenty nation states ranked by GDP per capita only five can be said to lie within this area. Further of these five nations Brunei and the UAE derive over 85% of their GDP from petroleum and natural gas extraction. If there was no correlation between latitude and affluence we would expect 40% of the world's surface area to contain roughly 40% of the world's top 20 nations ranked by affluence, not 25% with 10% of them being wealthy essentially due to a lucky location.

2.  All of the most Northern nations (Canada, USA, Denmark (Greenland), Norway, Finland) rank within the top twenty of all nations based on per capita GDP.

3. The majority of nations along the equator have GDP per capita values below the world average.

It's a pretty compelling argument for moving towards a polar region if you want to get rich quick.  However, a closer look at the data shows that these facts are attributable to reasons not innately associated with latitude. The top twenty nations by per capita GDP are nearly all western Europe and North America, areas that aren't terribly near the equator.  The most northern nations are very wealthy but the next most northern nation (Russia) is not and the most southern nations generally aren't. It's true that most equatorial nations are below the world average but that's because most of them are traditionally undeveloped African countries.

So while it was interesting to investigate the end result is only a conclusion that you should evaluate data yourself rather than accepting media sound bites or journalist's summaries.
Posted by Matt Criscione at 4:03 PM