Every year millions of Americans gather together for the second most American holiday of the year, Thanksgiving (the first of course is the festivals of explosions and barbecue known as the 4th of July).  On the fourth Thursday of each November we gather with our families to celebrate enormous quantities of food and the start of the Christmas shopping season.  It's hard to imagine two things closer to our collective hearts.

Thanksgiving is not a time for waxing philosophic or deep thoughts.  It's a day of simple enjoyment, family togetherness and loosened belts.  In that spirit here are some facts you might not have known about the most iconic Thanksgiving dish, the Turkey. All information can be found at the USDA's, National Turkey Federation's  or FSIS websites if not otherwise cited.

Over the last 40 years the average size of a turkey has increased by 64%. The average income of the top 20% of earners in the United States over the same period increased by approximately 59% (in 2011 dollars) source. Is the "Big Turkey" lobby making the rich richer?

Turkey production peaked in 1995 at almost 300,000,000 turkeys. That same year Newt Gingrich became speaker of the house. During his tenure the turkey industry experienced the worst 4 years in recent history.  Why does Newt hate Thanksgiving?

Last year total domestic turkey production was 7.3 billion pounds. Total miles traveled by car this year in America will total just under 3 trillion. This gives a miles per turkey lb ratio of 410 or four 1/4 lb turkey sandwiches per trip between San Diego, CA and Tuscon, AZ.

Total domestic turkey consumption in 2011 was approximately 5 billion pounds, equaling the consumption of all seafood for the same period source. This left the United States a sad second in seafood consumption but brought home the gold in turkey gobbling.

Finally the chart below demonstrates a clear correlation between disability awards (source) and turkey exports. 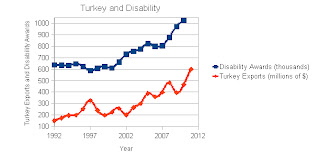 It's obvious that turkey has a far greater impact on our lives and economy than most of us realize. And if you find yourself disbelieving any of the conclusions drawn in the above data I can only suggest one thing.  Take this posting, and your Thanksgiving feast both with a grain of salt.